What the initial stage of psoriasis looks like: photo

According to official figures, approximately 3% of people around the globe suffer from psoriasis. But it should be assumed that the real number of patients with this type of dermatosis is much greater. Basically, the first signs of such an ailment appear at the age of 10-25 years, although there have been cases of diagnosing psoriasis in infants and the elderly. It is still not known for certain why it develops, but doctors have information about what the initial stage of psoriasis looks like. Therefore, with timely referral to specialists, you can manage to stop the progression of the disease at the earliest stages.

Initially, small round papules begin to appear on the patient's skin, the size of which, as a rule, does not exceed the diameter of a pinhead. These formations have a smooth, shiny surface and clear contours, but literally after a few days they begin to peel off. The resulting scales are silvery-white and can be easily removed from the papule surface. Over time, the number and size of the elements of the rash increases, and the disease progresses to a progressive stage.

The papules are usually reddish or pink in color, although in some situations they become bluish. This is observed with the formation of the primary elements of a rash on the legs. Depending on the type of ailment, the initial stage of psoriasis manifests itself on the elbows (extensor surfaces), knees, body, limbs or scalp.

If you remove all the scales from the pimple, you will find an absolutely smooth glossy surface under them - the terminal film. But with further scraping, it is quickly damaged, and the smallest drops of blood begin to appear. 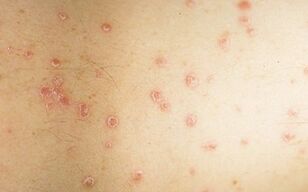 But it's much easier to see what the initial stage of psoriasis looks like in a photo.

Despite all the progress in medicine, today no remedy has been developed that would completely cure psoriasis. This disease is characterized by an undulating course, therefore, not only those who first encountered a similar ailment, but also those who have been living with it for many years pass through the initial stage of its development.

I would like to emphasize that there is no cure for psoriasis. With the help of modern drugs, physiotherapy procedures and other methods of therapy, you can "drive" the disease into a state of stable remission and, perhaps, even forget about it for several years. But this does not mean that in an unfavorable combination of circumstances, the patient will again not notice the characteristic rashes that manifest the initial stage of psoriasis on the hands and other parts of the body.

How do you know if psoriasis is progressing?

The transition of psoriasis to the second or progressive stage is evidenced by the growth and fusion of previously single papules, as well as the addition of hitherto absent itching. In addition, the nature of peeling also changes. Now it is observed only in the center of the formations, and their edges remain free of scales. This clearly enough indicates the growth of elements.

To confirm the transition of psoriasis to the second stage, you can use a kind of test. Its essence consists in minor damage to the skin of the affected area. If after about a week in the same place a psoriatic element of the same shape as the injury forms, this clearly indicates the progression of the disease. In the specialized literature, such a test is described as a symptom of Kebner. Moreover, this is observed even with the banal combing of the affected skin.

In some cases, patients have exudative psoriasis. It is characterized by the release of a special fluid. The scales are impregnated with it, as a result of which they turn into dense crusts. If one of these crusts is removed or damaged, the oozing skin area is exposed.