How to treat psoriasis of nails on hands and feet

One of the varieties of a dermatological disease that occurs in a chronic form is nail psoriasis. It can disturb an adult or a child if there are appropriate factors for its spread. The disease has many similarities with ordinary psoriasis, since it is also characterized by pathological layering of cells on top of each other, as a result of which there is a strong deformation of the nail plates.

Causes of the disease 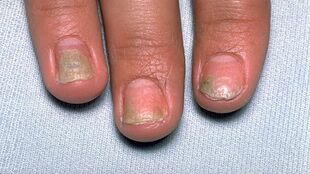 Some people are of the opinion that psoriasis of toenails or nails occurs in the presence of severe stress. Although it has been scientifically proven that strong emotional experiences are not able to lead to such changes. Therefore, they cannot be considered as the main cause of the development of the disease. Doctors identify 2 factors that can actually lead to a pathological process:

Several factors can lead to the activation of the disease:

In half of cases, psoriasis of the nails on the hands or feet develops together with the skin lesions.

Psoriasis can affect only the nails or additionally other parts of the body.

Nail lesions in psoriasis can be recognized by the symptoms characteristic of this condition. They begin to bother a person from the first days of the development of the disease. Common signs of a pathological process include:

If treatment is not started at the initial stage of the disease, it will continue to grow, and its clinical manifestations will become more pronounced.

Stages of the disease 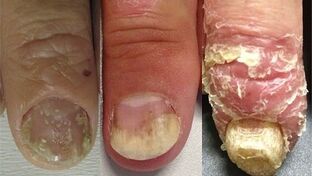 How nail psoriasis looks like, you can find out if you carefully study the photo showing the affected plates and fingers. At the initial stage of development, the manifestation of pathology is not too pronounced. An increase in symptoms is observed with the successful spread of psoriasis, in which healthy tissue is affected.

Doctors distinguish 3 main stages of the course of nail psoriasis:

Observing the development of a disease, doctors should already understand at what stage it is. This will help them find the best therapy for the patient.

An experienced specialist who diagnoses and treats dermatological diseases can immediately determine whether a person has psoriasis of the nails. Laboratory studies allow to verify the correctness of the conclusions drawn. To make a diagnosis, you may need:

Instrumental diagnostics for nail psoriasis is not required.

How to treat nail psoriasis 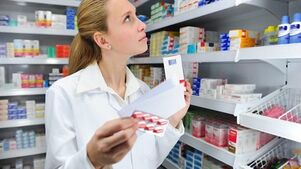 Nail psoriasis in children and adults requires complex therapy. One tool or procedure for such a diagnosis is not enough. Treatment for psoriasis of nails that are located on the hands or feet is standard for all patients. On an individual basis, they are selected medications and physiotherapy. Additionally, the patient will be advised to revise his daily diet and make significant adjustments to his usual lifestyle. After all, the success of the therapeutic course also depends on this.

As soon as a person notices signs of nail psoriasis, they should immediately consult a dermatologist. What kind of symptoms will help to recognize the disease was discussed above.

For a condition like nail psoriasis, treatment can be done at home. The doctor will prescribe a number of medications that must be taken orally or applied to the affected areas.

In the early stages of dermatological pathology, a topical agent should be used. Ointments and creams can be hormonal or non-hormonal. The former are in demand for advanced forms of the disease.

Non-hormonal medications rarely cause side effects and complications. In addition, they do not lead to addiction, in contrast to more aggressive preparations for the external treatment of the nail plate.

If a patient has a severely affected nail disease, the doctor will recommend oral medication. He will also tell you how to treat nail psoriasis in this way and what dosage to follow.

The following medications may be required for nail psoriasis:

In most cases, medications are not stopped until the disease has subsided. 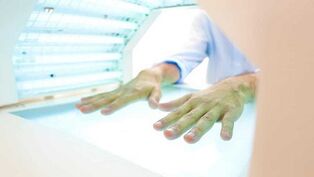 Finger nail psoriasis is often treated with physiotherapy. A good result for such violations is given by:

In order for the result to be only positive after the procedures, it is necessary to correctly select the number and duration of physiotherapy sessions. This task should be entrusted to an experienced professional. Otherwise, the patient who is trying to understand how to cure psoriasis will encounter serious side effects of the procedural treatment.

PUVA therapy is one of the most modern and effective methods.

In order for the treatment to be as effective as possible, a patient with psoriatic disease should pay attention to proper nail care. The disease severely injures their plate, so such care will not be superfluous. First of all, it consists in observing the rules of hygiene. Doctors recommend doing the following for this diagnosis:

Medical methods will be more effective if, in addition to folk and traditional methods of therapy, the patient adheres to these rules.

In psoriasis, it is especially important to protect your hands from aggressive exposure.

Traditional medicine experts know which plant heals psoriasis affecting the nail plate. They recommend it, like many other herbs, when preparing home remedies for the treatment of dermatological disease.

Patients can use the following folk remedies:

Folk remedies should be used in conjunction with traditional treatments. Otherwise, they will have no effect. 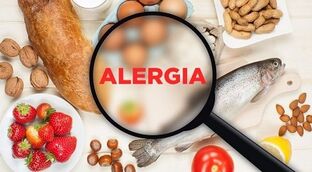 When a person's upper layers of the skin are affected, poor diet can be blamed. Because of it, the body lacks useful trace elements that support the immune and other systems. And as you know, due to failures, psoriatic disease occurs. Psoriasis-affected nails can be treated with a special diet. It must be hypoallergenic.

The nutrition of a patient with nail psoriasis should be balanced. It is strongly recommended to exclude foods that can lead to allergies. These are chocolate, strawberries, citrus fruits and coffee. You will also have to give up salty, smoked, pickled, spicy and fatty treats. Ketchup, mayonnaise and mustard are banned.

During periods of exacerbation of an autoimmune disease, it is recommended to follow a mono-diet, which is designed for 1-2 days. Such nutrition involves the use of only 1 product. It can be apples, kefir, fish or cereals.

A therapeutic diet should be enriched with fermented milk products, fruits, vegetables, herbs and lean fish.

Foods that can cause allergies can also exacerbate psoriasis.

It is much easier to try to prevent the development of nail psoriasis than to fight it later. Disease prevention consists in following a number of recommendations:

Don't forget to take care of your own skin and nails. This is the only way to protect yourself from the development of psoriasis and its relapses.

Psoriasis is one of the diseases that is progressing all the time. Medication and physical therapy only temporarily halt the development process. Not a single person was able to fully recover. If the patient adheres to the recommendations of a specialist, then he will be able to prevent repeated damage to the skin and nails.

Psoriatic nail lesions should be treated from the first days of its development. If therapy is absent or was chosen incorrectly, then the patient risks facing the complications and consequences of an autoimmune disease.

With nail psoriasis, the cardiovascular system can be severely affected. It is the vessels that face the greatest danger, since pathological changes occur in them under the influence of the disease.

Any form of psoriasis can cause psychological problems. They are directly related to the fact that others rarely relate normally to a person with similar defects on different parts of the body. Because of this, the patient withdraws into himself, begins to abuse alcohol, he is constantly pursued by a depressive state. Against the background of a disturbed psyche, the likelihood of the appearance of malignant processes in skin cells increases.