How psoriasis begins - the first signs of the disease

Scaly lichen is a very common skin disease, and dermatologists are most often found with it. This disease looks not only not very aesthetically pleasing (red flaky spots of irregular shape on the skin scare away many others), but it brings mental discomfort, physical and psychological problems, and in the future, serious complications. 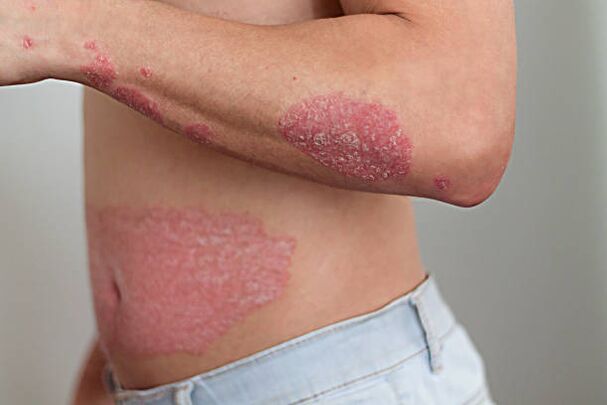 Therefore, knowing about the insidiousness of the disease and the pitfalls of its chronic course (frequent relapses) in a family where there are already patients with scaly lichen, its members are especially afraid of getting sick and are wary of any change in the skin.

What triggers the first signs of psoriasis?

Despite the fact that psoriasis is not inherited (this has been proven by the latest research), there are many factors that, with a predisposition to psoriasis, can trigger its clinical manifestation.

At what age do the first signs of psoriasis usually appear?

The first signs of psoriasis can appear at any age. Scaly lichen does not spare either the elderly or children. There are cases of the onset of the disease in infancy and the appearance of psoriatic plaques after 80. But more often the first signs of psoriasis reveal themselves at a young age from 14 to 30. As a rule, such patients, even at such a young age, already have concomitant diseases, for example, suchsuch as obesity, allergies, diabetes mellitus, neurasthenia, thyroid pathology.

The first signs of psoriasis in humans

The manifestation of psoriasis depends on the type of disease. But, in any case, the first symptoms in cutaneous forms of psoriasis are the appearance of a rash. The rash is a rounded epidermal papule. What is the mechanism of development of psoriatic papules?

The provoking factors trigger the inflammatory process, which is based on hyperkeratosis (pathological cell proliferation). As a result, the epidermis thickens, begins to protrude above healthy skin, forming a nodule. This is the primary element of scaly lichen - psoriatic papule.

The papule has a bright pink color, which differs in intensity. Initially, the papule is dark pink (up to a deep red color), then it becomes more faded and flaky. Dead scales of the epithelium have a grayish-silvery color, they are very easily separated when scraped off. In the underlying layer of the dermis, new blood vessels appear, which supply the emerging cells of the epidermis with nutrients. Because of this, during remission, even in the absence of plaque, the skin will be reddish in color. As the process aggravates, the elements increase and occupy an ever larger area. The skin in these places is dry, cracks, bleeds, that is, there is an obvious clinic of psoriasis.

The favorite places for the first rashes in psoriasis are the scalp, face (in adolescents), natural skin folds (in children), joints (elbows, knees), feet and soles. Psoriatic plaques, unlike eczema, are usually located on the outer extensor surfaces of the joint.

They talk about the initial stage of psoriasis if no more than 10% of the skin surface is affected. An experienced dermatologist will immediately recognize the symptoms of psoriasis, but sometimes allergic dermatitis or rheumatoid arthritis (with psoriatic joint damage) is confused with psoriasis.

The first signs of plaque psoriasis

Plaque soriasis is a vulgar cutaneous psoriasis, so its first signs are the easiest to spot. Psoriasis begins with the appearance of a small number of small nodules, which are usually localized in the area of the joints. They resemble a small abscess filled with light-colored contents. The primary elements of psoriasis do not bother the patient and are hardly noticeable. They can pass on their own, but after a while they reappear in greater numbers and become more noticeable. If you scrape the papule, it immediately becomes covered with silvery scales. In the summer, under the influence of ultraviolet radiation, the rash can disappear. With the progression of the disease, its amount increases, it covers more extensive areas, and individual elements merge into extensive plaques.

Sometimes the first signs appear immediately violently and abundantly. In response to the provoking factor, the skin becomes covered with bright pink-red psoriatic plaques, which cause severe itching. But such a beginning is uncommon for psoriasis.

The first signs of nail psoriasis

The first changes in the nails can be varied and resemble a fungal infection. Delamination, brittleness, thickening of the nail plate appears, depressed points or grooves are visible throughout the nail. Moreover, the first pathological signs appear at the edge of the nail, then they move to the root. One of the initial symptoms of nail psoriasis is a discoloration of the nail. The nail plate may turn yellow, gray or white. Hemorrhage may appear under the nail. All these signs can be on all nails or only on one.

The first signs of psoriasis of the soles and palms

In some patients, the only clinical sign of psoriasis is lesions of the soles or palms in the form of dense psoriatic lesions covered with scales. When scraping, a glossy shiny surface appears, which, with further injury, begins to bleed ("bloody dew" syndrome).

The first signs of psoriasis of the scalp

Scalp psoriasis resembles seborrhea due to profuse scaling. It can proceed apart, without affecting other areas of the skin, for a long time. Patients are treated for dandruff by buying special shampoos, not even realizing that they have psoriasis on their heads. After some time, the lesion affects the behind the ear, the neck and goes down below. And only in this case, the patients begin to sound the alarm and go to the doctor.

The first signs of psoriatic arthritis

With psoriatic arthritis, rashes may not be present. The first signs of psoriasis will be complaints of deformity of the joints, which increase in size and become painful. The fingers and toes are swollen and resemble sausages. As the disease progresses, the gait changes. It can be problematic to diagnose psoriasis in this form, many patients are treated for arthrosis and rheumatic arthritis. In this case, the presence of psoriasis in relatives and a careful differential diagnosis with diseases affecting the joints helps to make the correct diagnosis.

The first signs of psoriasis in women

If psoriasis already occurs at the time of conception, then pregnancy can have a beneficial effect on skin manifestations and a period of remission will begin. But after childbirth, perhaps an aggravation of all processes. Most often, according to statistics, the first signs of psoriasis in women occur during childbirth and during menopause. For other positions, the symptoms and signs of psoriasis in women and men do not differ. But children's psoriasis has its own characteristics.

What to do when the first signs of psoriasis are found?

In any case, if the first signs and symptoms of psoriasis are found, an urgent need to consult a dermatologist in order to start treating the disease in a timely manner. The doctor will prescribe treatment for psoriasis, taking into account the severity of the course and the specifics of the manifestations of the disease. It has been proven that if less than 5% of the skin is affected by psoriasis, all symptoms can be eliminated. But the treatment must be selected by a competent specialist.

If possible, when the first signs of psoriasis or any dubious symptoms appear, come for a consultation with dermatologists in Germany: