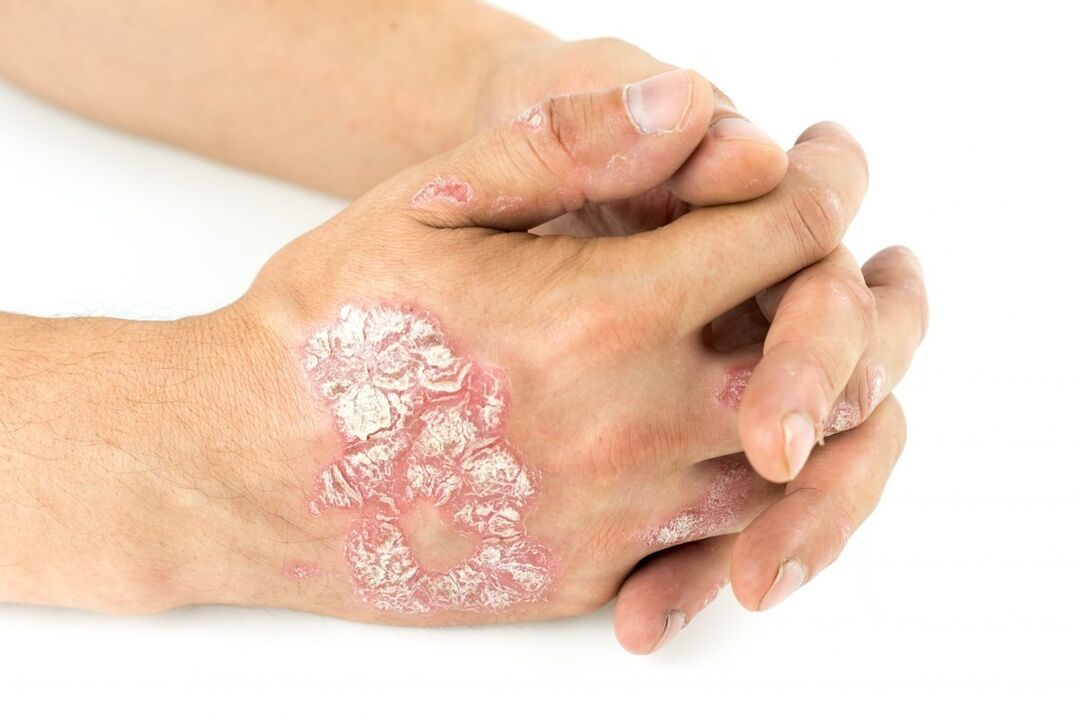 Psoriasis is a chronic non-infectious disease, dermatosis, which mainly affects the skin. The autoimmune nature of this disease is currently assumed. Psoriasis usually causes overly dry, red, raised patches of the skin. However, some psoriasis sufferers do not have any visible skin lesions. The spots caused by psoriasis are called plaques. These spots are by their nature sites of chronic inflammation and excessive proliferation of lymphocytes, macrophages and keratinocytes of the skin, as well as excessive formation of new small capillaries in the underlying skin layer.

The causes of psoriasis are currently not yet fully understood. At the moment, there are two main hypotheses regarding the nature of the process that leads to the development of this disease.

According to the first hypothesis, psoriasis is a primary skin disease in which the normal maturation and differentiation of skin cells is disrupted, and there is an overgrowth and proliferation of these cells. At the same time, the problem of psoriasis is seen by the supporters of this hypothesis as a violation of the function of the epidermis and its keratinocytes.

Autoimmune aggression of T-lymphocytes and macrophages against skin cells, their invasion into the thickness of the skin and excessive proliferation in the skin are seen as secondary, as the body's response to the excessive multiplication of "wrong", immature, pathologically altered keratinocytes. This hypothesis is supported by the presence of a positive effect in the treatment of psoriasis with drugs that inhibit the multiplication of keratinocytes and / or cause their accelerated maturation and differentiation and, at the same time, do not possess or possess insignificant systemic immunomodulatory properties - retinoids (synthetic analogues of vitamin A), vitamin D, and in particularits active form, fumaric acid esters.

The second hypothesis suggests that psoriasis is an immune-mediated, immunopathological, or autoimmune disease in which overgrowth and multiplication of skin cells and, above all, keratinocytes are secondary to various inflammatory factors produced by cells of the immune system and / or to, and autoimmune cell damageskin causing a secondary regenerative reaction.

What happens to the skin and how to provide it with care?

Impaired barrier function of the skin (in particular, mechanical injury or irritation, friction and pressure on the skin, abuse of soap and detergents, contact with solvents, household chemicals, alcohol-containing solutions, the presence of infected foci on the skin or skin allergies, deficiency of immunoglobulins, excessive dry skin) also play a role in the development of psoriasis.

Infection in dry skin causes dry (non-exudative) chronic inflammation, which in turn causes psoriasis-like symptoms such as itching and increased skin cell proliferation. This in turn leads to a further increase in dry skin, both due to inflammation and increased proliferation of skin cells, and due to the fact that the infectious organism consumes moisture, which would otherwise serve to moisturize the skin. To avoid excessive dryness of the skin and reduce the symptoms of psoriasis, it is not recommended for patients with psoriasis to use washcloths and scrubs, especially hard ones, as they not only damage the skin, leaving microscopic scratches, but also scrape off the upper protective stratum corneum and sebum from the skin, which normally protectskin from drying out and from penetration of microbes. It is also recommended to use talcum powder or baby powder after washing or bathing to absorb excess moisture from the skin, which would otherwise "get" to the infectious agent. Additionally, it is recommended to use products that moisturize and nourish the skin, and lotions that improve the function of the sebaceous glands. It is not recommended to abuse soap, detergents. You should try to avoid skin contact with solvents, household chemicals.

It is believed that if healthy parents have a child with psoriasis, then the likelihood of the next child getting sick is 17%, and in the presence of psoriasis in one of the parents, the possibility of the disease in children increases to 25% (with the disease of both parents - up to 60-70%).

Due to the fact that in most patients with psoriasis it is not possible to establish the hereditary transmission of dermatosis, it is believed that it is not psoriasis itself that is inherited, but a predisposition to it, which in some cases is realized as a result of a complex interaction of hereditary factors and unfavorable influences of the external environment.

What does it take to be diagnosed with psoriasis?

This is usually much more difficult in children than in adults: in children, psoriasis often takes on an atypical form, which can lead to diagnostic difficulties. And the earlier the diagnosis is made, the more opportunities to fight the disease.

There are no diagnostic procedures or blood tests specific to psoriasis. Nevertheless, with active, progressive psoriasis or its severe course, abnormalities in blood tests may be detected, confirming the presence of an active inflammatory, autoimmune, rheumatic process (increased titers of rheumatoid factor, acute phase proteins, leukocytosis, increased ESR, etc. ), as well as endocrine and biochemical disorders. Sometimes a skin biopsy is necessary to rule out other skin conditions and histologically confirm the diagnosis of psoriasis.

How is psoriasis treated?

It is worth starting to treat children's psoriasis as early as possible and monitor the child so that he observes all the doctor's advice. The baby's immune system is very sensitive. With the right approach, she can cope with psoriasis, and if you let the disease take its course, the skin will be more and more affected.

If the child has symptoms of the disease - plaques on the skin, itching, redness, peeling, you need to immediately start treatment, strictly follow all the doctor's recommendations, and he will advise you to apply a special cream to the skin.

In a progressive stage and with common forms of the disease, it is best to hospitalize the child. Prescribe desensitizing and sedatives, inside 5% calcium gluconate solution or 10% calcium chloride solution in teaspoons, dessert or tablespoons 3 times a day. Apply a 10% solution of calcium gluconate intramuscularly, 3-5-8 ml (depending on age) every other day, 10-15 injections per course. With severe itching, antihistamines are needed inside in short courses, for 7-10 days. In older children in a progressive stage, with an agitated state, poor sleep, small doses of hypnotics and small tranquilizers sometimes give a good effect.

Apply vitamins: ascorbic acid 0. 05-0. 1 g 3 times a day; pyridoxine - 2. 5-5% solution, 1 ml every other day, 15-20 injections per course of treatment. Vitamin B12 is especially indicated for common exudative forms of psoriasis - 30-100 mcg 2 times a week intramuscularly in combination with folic and ascorbic acids for 172-2 months. Vitamin A is given at 10, 000 - 30, 000 ME 1 time per day for 1-2 months. Patients with the summer form of psoriasis, especially with severe itching, are shown nicotinic acid inside. For psoriatic erythroderma, it is advisable: riboflavin-mononucleotide intramuscularly, vitamin B15 inside or in suppositories (in double dosage), potassium orotate. Vitamin D2 should be used with some caution in all forms of psoriasis.

In order to stimulate protective and adaptive mechanisms, pyrogenic drugs are prescribed that normalize vascular permeability and inhibit the mitotic activity of the epidermis. A good therapeutic effect is given by transfusions of blood, plasma, weekly, several times, depending on the result obtained. In children with persistent (exudative and erythrodermic) forms of psoriasis, sometimes it is not possible to obtain a positive effect from these funds. Then, glucocorticoids are prescribed orally at 0. 5-1 mg per 1 kg of body weight per day for 2-3 weeks, followed by a gradual decrease in the dose of the drug until it is canceled. Because of their toxicity, cytostatic drugs are not recommended for children of all ages. In the stationary and regressive stages of the disease, a more active therapy is prescribed - UFO, general baths at a temperature of 35-37 ° C for 10-15 minutes, after 1 day.

It is necessary to emphasize the importance of sanitation of focal infection (diseases of the respiratory tract, ENT organs, helminthic invasions, etc. ). Tonsilectomy and adenotomy for children with psoriasis can be performed after the age of 3 years. In 90% of cases, these surgical interventions have a beneficial effect on the course of the process, and in 10% of patients, especially with widespread exudative psoriasis, exacerbations continue. Follow-up examination after 7-10 years showed that 2/3 of patients after tonsillectomy did not have relapses of the disease, but even the remaining 1/3 of children with exacerbations of the rash were scanty and remissions lengthened; in non-operated children with psoriasis and chronic tonsillitis, exacerbations of dermatosis were more frequent.

Our long-term observations of children indicate that in most cases, relapses of psoriasis with age occur less frequently, are less pronounced and a tendency towards the transition of common forms of dermatosis to limited ones is clearly visible. However, in some patients, the process remains generalized, with a severe course.

Is psoriasis a diagnosis for life?

If you start timely and correct treatment, then no. The development of psoriasis in a child does not at all mean that, as an adult, he will also suffer from this ailment. Of course, psoriasis is a chronic disease, it is almost impossible to recover from it 100%. But the quiet period can be maximized. Children's psoriasis is treated like an adult, changing from one type of treatment to another every three months.

The child should be psychologically prepared in advance for the fact that there are flaws on his body. Unlike adults, in children, psoriasis often affects not the body, but the face (30% of cases). Rashes can appear on the forehead, on the cheeks, and on the eyelids. Psychologically, it is quite difficult to endure. Also, in one third of children with childhood psoriasis, nails are affected. Therefore, it is rather difficult to hide the disease.

In addition to physically unpleasant sensations, psoriasis can be a severe test for a child's state of mind. Parents should not leave him alone with a problem. Any activity should be encouraged: sports, games. However, it is worth remembering the precautions. For example, the skin on certain areas of the body can be stretched (for example, when cycling for a long time). And this can provoke psoriasis. Despite the outwardly unsightly skin condition, the child can go swimming! And if there are chemicals in the water, remove

Why is there still no cure for psoriasis completely?

This disease is called mysterious for a reason. The essence of this disease is still not clear. Some psoriasis affects the face, others have limbs, some have joints! Why marriage occurs in the cells of our body is not clear. As an oncology, psoriasis cannot be treated with pills. Interesting developments are underway in our country now. They try to treat children with ointments made from natural raw materials. The forecasts are favorable, but the ointment has not yet entered production. In the meantime, my advice to parents is not to trust charlatans and pseudo-healers, and in case of signs of psoriasis in a child, contact a professional - a pediatric dermatologist.