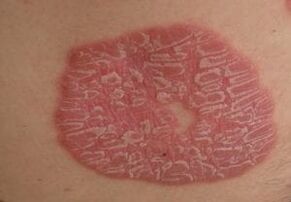 Having appeared, psoriasis in most patients does not go away on its own, but only progresses and becomes more extensive, spreading over the skin.

However, with timely diagnosis, it becomes easier to treat it, and recovery comes much faster.

The main thing here is to pay attention to the first signs of psoriasis in time and immediately make an appointment with a dermatologist.

The place of appearance of such rashes is directly dependent on the form in which the disease proceeds.

In most cases they can be seen:

Primary eruptions (papules) are very small in size: their diameter does not exceed 4 millimeters.

However, as the disease progresses, they enlarge and merge with each other, forming unclear plaques.

Most often, the appearance of papules is not accompanied by pain or itching. The feeling of discomfort increases with the development of psoriasis and the increase in the size of the affected skin areas.

The affected area begins to ache and itch, and there is a strong burning sensation.

These signs of psoriasis are complemented by emotional inconveniences that can significantly increase the rate at which the disease spreads.

It is inappropriate, when such rashes are found, to begin self-treatment, since psoriasis in the early stages of development has similarities with other diseases of the skin.

Accordingly, the wrong choice of drugs will not lead to positive results, but will only worsen the situation.

Scaly lichen belongs to the category of systemic pathologies.

This means that it manifests itself not only on the skin and nails, but also can affect the spine, joints and tendons, some body systems (for example, endocrine, immune and nervous).

There are cases when the disease affects the digestive (liver) and urinary (kidney) systems.

The first symptoms of psoriasis

Due to the complex effect of the disease on the body, experts consider it appropriate to call it psoriatic disease.

But, despite this, the key aspects of the disease are based on the damage to the skin.

As mentioned above, the first call to the beginning of the development of pathology are small papules in the color range between pale pink and red.

They differ in a symmetrical position on the surface of the skin (folds, lower back, head area covered with hair), sometimes - on the mucous membrane of the external genital organs.

The size of papules in the further course of the disease can exceed 10 centimeters.

Psoriatic eruptions, depending on their characteristics, are subdivided into:

Above the papules are covered with plaques with scales, which are formed from keratinized cells of the epidermis and are removed without much effort. Initially, they appear in the center of the plaque and gradually spread further and further.

Keratinous cells have air gaps, which leads to a visual friability and a light shade.

Sometimes elements are surrounded by a pink ring that acts as an area of ​​plaque growth and inflammation. In this case, the state of the surrounding skin does not change.

Removing plaque reveals a shiny, deep red surface based on capillaries, which in turn have very thin walls.

The presence of such small in diameter vessels is due to damage in the structure of the upper layers of the skin, the structure of which is disturbed due to the incomplete process of maturation of epidermal cells (keratinocytes), which makes their correct differentiation impossible.

Symptoms of different forms of psoriasis

Common psoriasis has quite specific symptoms, so it won't be difficult to diagnose.

It appears as scaly, rounded areas that protrude above normal skin and are pink or red.

Sometimes, in the early stages of the disease, there are no plaques characteristic of it: before they appear on the scalp and in the area of ​​the joints (ankle, elbows and knees), small papules can be observed.

They are able to persist for a sufficiently long period of time and not cause any inconvenience to the patient: nothing itches and pain or no pain at all, or they are practically not felt, the papules themselves are almost impossible to notice.

They do not peel off, but when lightly scraped, the scales appear immediately. Such pinkish seals can disappear or significantly decrease in size in the summer, since the sun's radiation affects the skin.

The acute form of common psoriasis manifests itself in the form of multiple constantly itchy rashes of brightly colored papules and is the result of the influence of factors activating the disease.

To avoid mistaking it for an allergic reaction, you need to scrape the surface of the plaque a little before the characteristic phenomena appear.

Seborrheic psoriasis begins on the scalp (hairy area) and then spreads to the face and shoulders.

It is characterized by severe peeling of the skin of the corresponding zone, which is most often regarded by patients as dandruff, so they do not rush to a dermatologist.

This fact allows the disease to quietly reach the stage of development when the forehead and areas behind the ears are peeled. And only after that plaques form.

The lesion of the folds of the skin with psoriatic disease (armpits, genitals and groin, under the breasts in women) is often confused with ordinary irritation caused by friction or sweat.

This type of disease is characterized by smooth plaques that look like spots. Peeling is not observed, but they often get wet. The rashes themselves are bright red, they are even and shiny.

In case of damage to the genitals, the characteristic signs of psoriasis may be incorrectly interpreted as balanoposthitis (lesions of the head of the penis, as well as the foreskin on its inner part) in men and vulvitis (rashes localized on the labia minora) in women.

The palmar-plantar form of the disease manifests itself in the form of compacted areas similar to calluses, the surface of which is covered with yellow scales that are difficult to remove.

The affected areas are cracked and sore. With this form of the disease, it is difficult to induce the appearance of a terminal film and bloody dew by scraping.

Nail psoriasis begins with psoriatic onychodystrophy, which is one of the primary symptoms of this form of the disease and appears much earlier than rashes.

In the early stages, the edge of the nail is covered with grooves and small depressed areas.

With the development of the disease, they spread, reaching the root, after which changes in its color are observed. The nail dulls and thickens. Due to failures in blood circulation, the manifestation of the disease increases.

Epidermal cells accumulate under the nail plate, and it is bordered by reddened tissues on all sides, after which it can peel off after a while.

This type of psoriasis is dangerous because it increases the sensitivity of tissues, which in turn increases the likelihood of infection. Quite often, this disease is mistaken for a fungus.

Moving joints of bones (joints) are often affected. They are deformed, the joint capsule undergoes modifications of the dystrophic type.

Psoriatic arthritis begins with an increase in joint volume, which is accompanied by pain.

The fingers of both hands and feet are most susceptible to this type of psoriasis.

In severe forms, the shoulder and elbow, hip and knee joints, as well as some parts of the spine, are exposed to the disease.

Influence on the manifestation of symptoms of psoriasis stages

The symptoms of psoriasis are in direct proportion to the season of the year and the stage in which the disease is.

Most often in the spring-summer period there is a noticeable decrease in the activity of the disease, which is facilitated by ultraviolet rays.

Accordingly, in the autumn-winter period due to a lack of sun, the disease is rapidly gaining momentum. There are practically no patients with summer exacerbations.

There are three stages of psoriasis:

Diagnosis of psoriasis is carried out on the basis of the information obtained from a medical examination by interviewing a patient, as well as symptoms inherent in one form or another of the disease.

The sooner a disease is detected, the faster the treatment process begins. Accordingly, more tangible results will be obtained.

Due to the very specific picture of the disease, the diagnosis of psoriasis can be limited to a simple examination by a dermatologist.

But in some cases, difficulties may arise due to the implicitness or absence of symptoms, which happens if the disease does not manifest itself in any way or looks uncharacteristic. This situation necessitates further research procedures.

A specific method is used to make a diagnosis, which consists in the gradual scraping of the papules along the layer.

As a result of such manipulation, it is possible to identify characteristic signs (psoriatic triad) for differentiating psoriasis with other diseases and making a final diagnosis:

If necessary, the patient is tested in the form of samples of affected tissues.

X-rays are taken if psoriasis-related arthritis is suspected.

If psoriasis is at an early stage, its diagnosis is not difficult: the picture of osteoporosis is clearly visible.

In later periods, there is a narrowing of the joint space, erosion of tissues that form bones, osteosclerosis and periostitis.

If the disease is severe, the joints of the wrist and metatarsus are destroyed, as a result, the joint completely loses its mobility.

It should be noted that all the tests carried out are necessary not only for the final diagnosis, but also for differentiation with other diseases, which, at first glance, are identical.