Psoriasis on the head and the main places of its localization 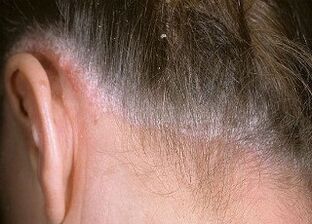 Quite often, the lesion is localized in one place. Late treatment can aggravate the situation.

This kind of ailment is not transmitted to others. A person suffering from such a disease is safe for society.

The main cause of skin defects is impaired metabolism.

As already noted, the disease is not infectious, therefore the patient is not able to harm the health of the people around him. The presence of psoriasis in a person indicates the inability of the body to respond normally to the presence of various kinds of stimuli. As a result, excessive cell division occurs. According to statistics, the normal process of cell division is about 30 days.

During this period, the upper layer of the epidermis is gradually replaced by new ones. In psoriasis, excessive growth of new cells can be observed, which begin to overlap with old ones. The division period is reduced by 4 days. As a result, small scaly lesions appear on the surface of the scalp.

In most cases, they present as mild inflammation accompanied by itching. In the process of exfoliation of the old layer of the epidermis, pink spots of various shapes are formed on the surface of the skin. Gradually, they begin to be covered with new formations of skin cells.

Scientists have identified a number of reasons that can also trigger a malfunction in normal metabolism, these include:

If there are major signs of psoriasis on the scalp, it is recommended that you seek the help of a professional dermatologist. He will select the appropriate treatment to prevent the appearance of new lesions. Scalp psoriasis in most cases occurs in people aged 30–36 years. It rarely occurs in young children

At the first stages of the course of psoriasis, the patient does not feel any changes. The disease proceeds slowly and without discomfort. On visual examination, in rare cases, the doctor observes the presence of dandruff in a small amount. With a more complex course of psoriasis of the scalp, the patient experiences severe itching and burning in the back of the head, forehead and ears. Plaques with dry scaly elements form on the affected areas.

Microcracks begin to form on the skin, through which the infection enters the body. At the site of peeling, dry parts of the skin begin to grow rapidly. Under mechanical stress, these plaques begin to flake off, leaving red spots. In this case, the patient needs to choose the appropriate medication to prevent the progression of the disease.

Today, psoriasis on the head is a fairly common type of disease, which occurs in every fourth patient. Untimely treatment is the main reason for the spread of the disease throughout the body. The disease can take several forms, each accompanied by new health problems. 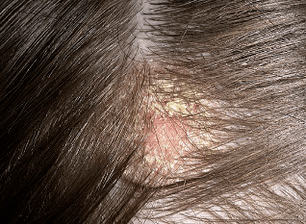 The main sites of psoriasis of the scalp are:

The disease has two forms: mild and severe.

During the initial stage, the patient does not experience any unpleasant sensations. The main symptom may be the persistent presence of dandruff, which appears after two days after shampooing. With a severe form of the disease, the patient has psycho-emotional discomfort, a constant burning sensation and itching on the affected area of ​​the skin.

Psoriasis on the head has several stages of the disease.

A severe course of the disease can cause the death of hair follicles, which provokes premature baldness of certain parts of the head. Scaly areas gradually thicken due to dead skin cells. On visual inspection, light-colored growths are observed on the surface of the hairline. Men are exempt from military service, as moral and physical stress provokes a severe course of the disease.

In medicine, there are two groups of scalp psoriasis. Each of them has a complex of varieties that describe all the characteristic diseases accompanied by the presence of similar symptoms. These include the pustular type.

Non-pustular type, in turn, is divided into:

Each type and subgroup has similar symptoms, but different rates of disease progression. With the pustular type of the disease, the patient has a progressive nature of the spread of foci that need good drug treatment. In the presence of a non-pustular type, the skin is less susceptible to attack by new formations.

The course of psoriasis in childhood

In young children, scalp psoriasis in the initial stage is often compared with an allergic reaction - there is a slight redness on the surface of the skin with elements of peeling. In most cases, the affected area is compared to diaper rash, candidiasis and eczema.

The disease progresses in slow motion. Often the initial impetus for the appearance of defects in the scalp is various drugs that contain aggressive components. The child should be treated under the guidance of an experienced dermatologist.

The initial stage of therapy is a strict diet. Citrus fruits, all kinds of dyes, fatty foods, carcinogens are completely excluded from the diet. Medication is prescribed to prevent the spread of affected areas. Mostly prescribed lotions, sprays, shampoos based on medicinal components. This therapy helps to restore hair follicles, preventing their death.

Correctly selected course of medical measures significantly mitigates the course of the disease.

A basic diet is selected for each child, which can eliminate the rapid spread of inflamed areas. In addition to proper nutrition and drug therapy, the patient is prescribed a course of physiotherapy, which contributes to the rapid regeneration of the affected cells of the epidermis.

All drugs for psoriasis are usually divided into two categories: external and internal. Using them, you can forget about the disease forever. As a rule, the use of external drugs is far from always possible due to the constant growth of hair, therefore, special balms and shampoos come to replace various ointments.

Not everyone knows how to treat psoriasis on the head, especially when faced with the disease for the first time. But most of the internal drugs are hormonal.

In the case of drug treatment, various medications with a general strengthening and sedative effect are often used. These can be well-known vitamin complexes, which are based on folic and niacin. Treatment of the disease in a hospital is mainly carried out in cases where psoriasis is severe or moderate. Specific treatment methods and drugs are prescribed based on the stage of the disease: stationary, progressive or regressing.

At the stage when treatment in the clinic is necessary, patients no longer have time to hesitate, and active measures aimed at removing inflammation and disinfection begin.

In addition to the standard set of injections and a wide variety of pills, external agents such as lotions and ointments are used. After the disease passes into the next stage - the time of regression, the patient is already discharged for further treatment at home. The course of treatment usually takes two weeks. And the doctor will have to tell about how to treat psoriasis on the head at home when he is discharged from the hospital.

To date, there are no drugs that would help to get rid of a disease such as psoriasis forever. The main goal of home treatment is primarily to control its development.

An increase in the time interval of the remission stage occurs due to the use of the following funds:

When prescribing home treatment, it is important to know a few rules that must be followed:

How to cure psoriasis on the head with folk methods 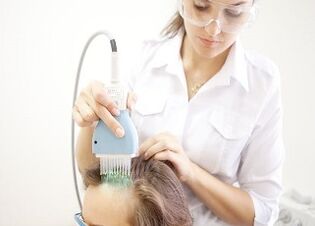 You can try to cure the disease using various folk remedies. Of course, using only them alone, it is unlikely that it will be possible to achieve stunning results, since psoriasis on the head can be cured only with complex treatment.

Folk remedies are good at helping to alleviate the situation and at the same time act as an additional therapy. Celandine is a plant on the basis of which the funds are used in the case of a wide variety of infectious and inflammatory skin diseases.

It has been proven many times that in the case of psoriasis treatment it can also have a positive effect on the skin. Take the simplest alcoholic tincture of the plant and rub the scalp with it. After that, it is advisable to rinse the hair a little with chamomile infusion. If discomfort occurs during the use of the product, it is necessary to stop using it. Despite the fact that there are a huge number of masks today, it is necessary to use them carefully in treatment, since they cause allergic reactions.

One of the most popular mask recipes, which you can prepare yourself, is the following: mix the egg white with a small spoonful of honey and apply the resulting mixture directly to your hair, rubbing it into the scalp with light massaging movements. Wash off the mask after 30 minutes.

Various masks based on oils are quite effective. You can take an essential oil such as rosemary or tea tree and add a small spoonful of almonds / coconut to it. The resulting mixture must be applied to the hair and kept for at least two hours. It is necessary to wash off such a mask with a special therapeutic shampoo.

It is worth noting that you will have to lather your hair more than once. Onion compresses are often used against the disease. They are very easy to do. It is only necessary to cut a little of the fruit to a state of porridge and apply directly to the scalp with massaging movements. Such a compress is washed off after two hours.

For maximum effect, this procedure should be repeated at least three times a week. This drug has only one, but rather serious disadvantage, which is a strong odor, which is unlikely to get rid of on the same day when the compress was applied.

One of the most important conditions for effective psoriasis treatment is strict adherence to a specially formulated diet.

Its essence lies in the exclusion of a number of foods from the diet:

Also, for strict adherence to the diet, it is necessary to minimize the consumption of eggs and sugar in any form. After the symptoms have partially disappeared, it will be possible to reuse foods from the prohibited list in food. However, you need to monitor what reaction the body will have. As soon as symptoms reappear, the product will need to be eliminated from your diet.

Brush your hair very gently and only after it is completely dry. After washing your hair, rinse it with boiled water with lemon juice. And if there are a lot of plaques on the head, you can use soap every two months to wash your hair.